This archive contains the images and packages generated from an experimental ipq806x target configuration for Gargoyle 1.12.0.

The source was from Gargoyle's git repository at tag 1.12.0.

At time of writing the only image I have tested is the Netgear D7800 sysupgrade image, which was installed via the firmware upgrade function of the previously installed experimental Gargoyle v1.11.x firmware.

The router has now run for several days as my primary internet gateway behind a bridged VDSL2 modem with a PPPoE WAN interface. Both upstream and downstream QoS have been enabled as the upstream internet stream is subject to severe bufferbloat - which Gargoyle's QoS appears to be controlling satisfactorily.

My testing has not been particularly comprehensive as my requirements are modest. In particular I haven't exercised the WiFi interfaces as I have no use for them most of the time.

With this configuration I have endeavoured to match the functionality configured for the Gargoyle mvebu target, which is the target with the most similarity to the ipq806x target in terms of hardware capability (e.g. CPU speed, available RAM and flash etc).

All packages identified in the mvebu configuration with the configuration option "m" (i.e. "module", aka optional rather than included in the firmware image) have been included. As there is no current package repository available for the ipq806x target, my understanding is that desired optional packages will have to be installed by copying to the target router (e.g. by scp or WinSCP) and manually installing with the gpkg command from an SSH session.

The default CPU frequency management configuration and interrupt to CPU core assignment of the ipq806x SoCs inherited from the standard Linux kernel configuration isn't optimum for maximum throughput with Gargoyle (or OpenWrt on which Gargoyle is based). More information on this topic can be found in several OpenWrt threads (see https://forum.openwrt.org/t/r7800-performance/15780 and https://forum.openwrt.org/t/netgear-r78 ... ca9984/285) as well as in the 1.11.0 build thread (see viewtopic.php?f=14&t=11988&start=20#p53775).

- Due to an OpenWrt bug ipq806x routers will reboot if presented with jumbo frames. Ensure that all connecting devices have jumbo frame support disabled to avoid this.

There are always risks associated with flashing firmware, especially third party firmware, so please carefully consider your circumstances before attempting to install one of these images and be prepared for the possibility of failure and the potential for your router to become unusable (aka "bricked"). Neither I or the Gargoyle team can accept any responsibility for such outcomes.

Unfortunately I cannot practically support this experimental release - despite having been able to assemble a configuration and build several apparently usable firmware images, I lack a lot of knowledge about router hardware and have limited experience with Gargoyle itself and little knowledge of the details of its operation.

If you have a question about installing these images, please refer in the first instance to the relevant OpenWrt hardware page for your router as what is written there for OpenWrt applies to installing Gargoyle. You should consider installing OpenWrt before installing any of these experimental Gargoyle images; you should then be able to install the respective Gargoyle "sysupgrade" image via OpenWrt's firmware upgrade
function - all being well. If in doubt, don't attempt to install one of these images.

For questions specific to this experirmental build, please post a followup to the Gargoyle user forum thread in which this archive was announced and linked. You may get lucky with someone able to provide assistance.

If you have questions about Gargoyle's interface or general functionality, queries should be addressed to an appropriate section of Gargoyle's user forum.

Successful installations of these images should also be reported by posting a followup to this thread, so that Gargoyle's maintainers can evaluate whether there's enough interest in the ipq806x target for adding full support for
at least some ipq806x devices to future Gargoyle releases. 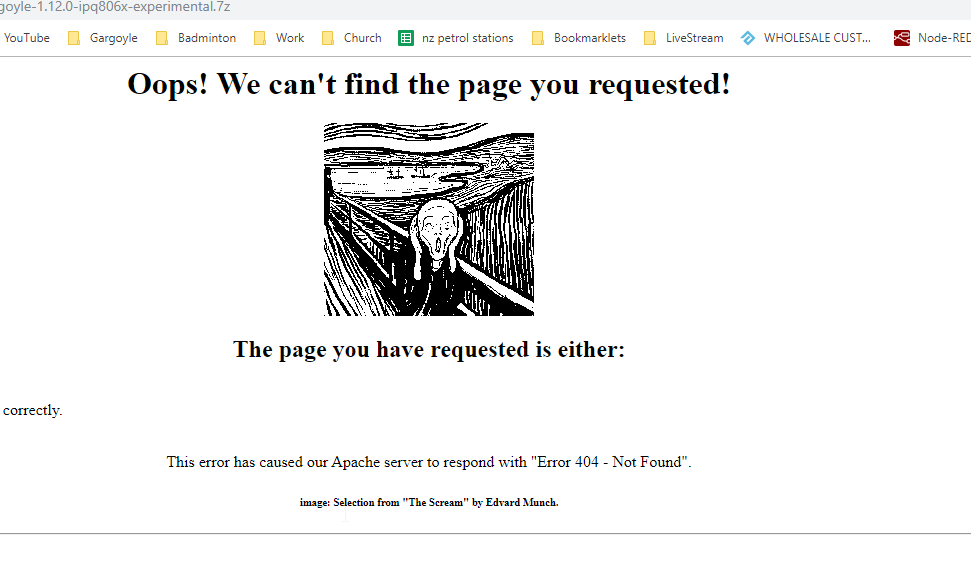 OK, I'm in the process of trying this build now. First I want to report that without the tweak from the old thread:
viewtopic.php?f=14&t=12158

Now I'm going to try this build and see if it fixes that crashing issue.
Top

OK, just tried with this version, and entering a coupon code on AliExpress rebooted the router. Going to try with 1.13 now.
Top

OK, so the 1.13.x build appears to be stable. This build hard resets the router when I try to enter coupons on AliExpress.
Top

Not entirely sure why, but it says more to me about AliExpress than the build

particularly if it the only site affected.
But who knows, it would be an incredibly strange bug to crash based on a website.
http://lantisproject.com/downloads/gargoyle_ispyisail.php for the latest releases
Please be respectful when posting. I do this in my free time on a volunteer basis.
Top

Lantis wrote:Not entirely sure why, but it says more to me about AliExpress than the build

particularly if it the only site affected.
But who knows, it would be an incredibly strange bug to crash based on a website.

Hahaha I'm not defending AliExpress by any means, lol.

We did actually have a few other random crashes though, but the only one I could reproduce reliably was the AliExpress one. I can do it on demand. Just add an item to cart, hit buy, and try to enter coupon codes. This only happens with Pythonic's 1.11.X and 1.12.0 builds.

Anyway, Lantis, your 1.13.X build is working fine after applying the CPU tweak. The only issue I'm having is that when I reboot the router, it can't see the
cable modem anymore. If I type "192.168.100.1" into the browser it can't find the modem and it's unable to get an IP address until I reboot the modem.

BTW I'm on a Linksys EA8500 in case you didn't see my post in the other thread.
Top

This is in PPPoE mode?
We've seen errors like that before on some Archer devices, its usually to do with what order the switches come online. I can try and take a look but it's usually hardware dependent.
http://lantisproject.com/downloads/gargoyle_ispyisail.php for the latest releases
Please be respectful when posting. I do this in my free time on a volunteer basis.
Top

Maniac wrote:OK, so the 1.13.x build appears to be stable. This build hard resets the router when I try to enter coupons on AliExpress.

This build is using the standard compiler optimisation setting (-Os) so that would appear to be eliminated as a potential source of the issue. The 1.13.x builds use a later version of the compiler, however this build uses the same version of the compiler as the original 1.11.0 build which I think you said worked ok in this regard? On the whole I think miscompilation is probably not the issue here.